Columbia, South Carolina Buick dealership Jim Hudson Buick is proud to announce the unveiling of the 2012 Buick LaCrosse with eAssist technology, a suite of systems designed to improve fuel economy approximately 25% compared to the current four-cylinder 2011 LaCrosse for an estimated 37 highway miles per gallon. 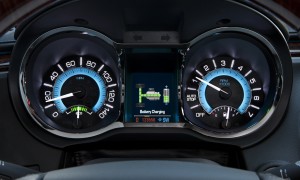 A revised instrument cluster is one of the few hints of the eAssist system's presence on the 2012 Buick LaCrosse. (GM Media)

The eAssist system uses an electric motor coupled to the Ecotec four-cylinder engine on the LaCrosse instead of the alternator found in traditional engines. A 115V battery pack located behind the rear seats provides the motor with up to 11 kilowatts (roughly 15 horsepower) of electric assistance while the LaCrosse is under heavy acceleration. This is a significant improvement over the 2 kilowatts of the last-generation belt-alternator-starter system found on models such as the Chevrolet Malibu Hybrid and the Saturn Aura Green Line. The eAssist system also provides up to 15 kW of regenerative braking power, capturing energy for later use that would otherwise be lost to heat and friction. The system also allows the 2.4L Ecotec engine to shut down fuel delivery in certain situations, allowing the motor to spin the engine to a stop at just the right position to restart smoothly. Unlike many hybrid sedans available in Columbia, the LaCrosse will retain its split-folding rear seat; cargo space will be reduced slightly to 10.9 cubic feet in order to make room for the battery that weighs in at around 65 pounds.

LaCrosse with eAssist will also include improved aerodynamics thanks to a new underbody tray and actively-controlled shutters on the lower part of the front grille. These shutters open and close according to the cooling needs of the engine; when the extra cooling ability is not required, the shutters can close to divert more air around the car to improve aerodynamics even further.

The new eAssist system will come standard on all 2012 LaCrosse sedans equipped with the four-cylinder engine. Pricing has not been announced, but is expected to be around $30,000. For more information about the Buick LaCrosse sedan, visit Jim Hudson’s Buick Dealer Columbia SC website, or visit them in person at 7201 Garners Ferry Road in Columbia.